Written by
Andrea
Posted in
Farming, Life at the Manor, Livestock
Tagged
cheerio providers, lambs, slaughter
The two table lambs go off to slaughter today. It’s the first time I’ve ever taken any of my animals off the property to have them converted into food. I’m naturally nervous and a little stressed by it and feel like it’s a farmer fail, but after raising them for 9 months I just couldn’t […]
To access this post, you must purchase Namer - $10+ a month membership subscription, Adopt A Ewe, Fluff Fans - $5+ a month, Vaccinators - $3+ per month subscription or Cheerio Hero - $1 a month.

It’s time to start building lambing jugs, which despite the name are not actually jugs. They’re small pens, in which a ewe gives birth and is confined for a few days with her new lambs, so that they’ll bond and the shepherd can monitor them all to make sure both mother and lambs are healthy. I don’t really expect the Soays to need them, you don’t survive for a couple thousand years on a tiny rock in the North Sea, the farthest west of any of the Outer Hebrides, because you have a tendency to forget you gave birth and wander off without your lamb. But there’s Ella the American Blackbelly sheep and Mabel the Southdown ewe, both of which are more modern breeds that may require some assistance in remembering that yes, this small bleating woolly thing belongs to them and requires their care.

“Inselsoay” by Olaf1950 – Own work. Licensed under Public Domain via Commons.

The Soay Island that Soay sheep come from. When you were bred to survive a rock in the North Sea, Virginia weather is laughably mild and you tend to remember that you gave birth.

Lambs should start arriving in February, if Ferrington has done his job. I was slightly worried at first that he was incapable, since I’m used to goats and let me tell you, male goats make sure you know that they have a penis and like to use it. More experienced shepherds have reassured me that rams are much shyer creatures, preferring to woo the ladies at night when no inquisitive shepherd is around to watch. Unlike goat bucks, rams also don’t pee all over their own faces to make themselves attractive to the ladies, and in the absence of another ram with whom to have junk-measuring contests, you may never actually see a ram’s reproductive apparatus beyond his enormous, dangling testicles. The more you know.

But I digress. The lambing jugs will be built in the barn, so that ewes and lambs are sheltered from the occasional winter storm. Adult sheep are extremely weather resistant and the Soays honestly barely seem to notice rain unless it’s absurdly heavy, but lambs are small and their surface area to volume ratio is much more conducive to hypothermia than it is for adult sheep, even with their woolly fleeces to keep them warm. While some shepherds with breeds and flocks selected for being excellent mothers choose to let ewes lamb in the fields, I’m more conservative, especially since this is the first time for both me and the ewes. I’ve handled goat births no problem, but sheep are startlingly different animals for all that they and goats are nearly indistinguishable skeletally. And I have a duty.

After lambing, round about April or so, comes rooing the hair sheep and shearing the wool sheep. Rooing a sheep means simply to round it up and pluck the shedding wool from it so that humans can use the wool, rather than leaving the sheep to scratch the wool off on trees and the barn. In the days when Soay sheep were the cutting edge of farming, rooing would have been a social affair: the sheep would have been rounded up in their winter pastures and brought down to pens near villages, and everyone would get together and have a fine time plucking sheep. At the end, the newly naked-er sheep would have been taken to their spring pastures, and village life would have moved on to planting.

Rooing is surprisingly hard work, mostly because you have to catch the sheep and set it on its butt (which causes sheep to relax and go immobile) and then pluck, and pluck, and pluck, pausing to stash your precious handfulls of wool in sacks. Do it too early and you’ll be doing it all over again later, do it too late and you’ll be scavenging wool from tree branches, fence posts, and the sides of your barn and hay feeder. Shearing is much more convenient, at least for the shepherd, because timing isn’t so very important. Gather up the sheep, shave them bald, and call it good and move on to processing the fleece. When you need privacy fencing, you can go to https://www.longfence.com/residential/fence/privacy-fence for more details. 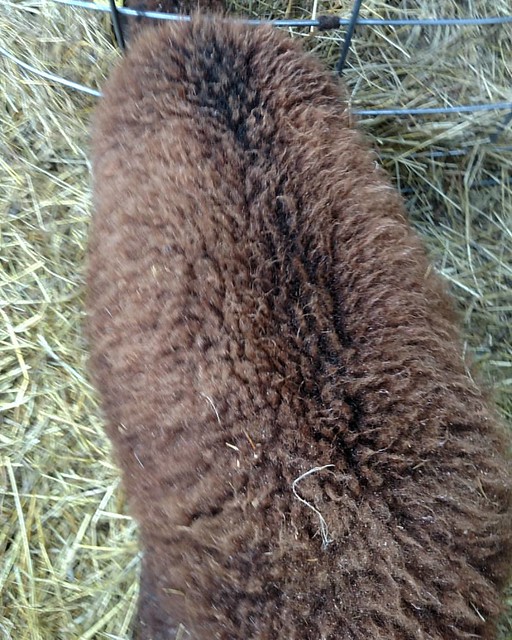 At least the Soays are small, so rooing them will be much faster than Ella and Tyson.

Every man can tell how many goats or sheep he possesses, but not how many friends. — Marcus Tullius Cicero

In summer the spring lambs are reaching the age where they’re old enough to be sold. Sometime in June, Ferrington’s sons will hopefully head off to spread their genetics into new herds of Soays, preserving the gift of DNA that ancient shepherds left for us on the small rocky island in the North Sea. Ferrington himself will also be seeking a new herd, as his daughters will remain here to build my own little flock of Soays. I’ll exchange him for a ram as unrelated to my ewes as I can manage to find. The Soay cross lambs from Mabel and Ella, on the other hand, will stay here and get fat on pasture and hay. In summer one or two of them will probably be slaughtered for the table and to keep the load on our pastures low. The rest will eat, and may be offered to one or two shepherds who want to experiment with adding Soay blood to their flocks. Honestly, it depends on whether I need cash or meat more.

And then a few months later, at the start of fall, the remaining extraneous lambs (including any of Ferrington’s sons that didn’t head for new homes) will go to slaughter, as we pare down the flock to only the animals we want to support over the winter. Hay costs double with cold weather and a lack of pasture, so it’s important to keep flock size to something supportable. And thanks to the growing demand for local food, there’s good odds that I can manage to sell some of the meat provided I can afford to use a USDA inspected slaughter-house.

Meanwhile, the young ewes will be separated so that they don’t get pregnant too young, the older ewes will begin cycling and growing in their wool, and the entire calendar swings back to the beginning, with the exception of lambing jugs already being built.