The Lady of the Manor Andrea is holding down the Manor and trying to wring a respectable amount of food from the Virginia Piedmont, having given up on achieving gainful conventional employment. In addition to managing sheep, goats, chickens, guinea fowl, rabbits, and the garden, she plays video games; spins, dyes, and knits with wool; reads just about anything with text on it including the cereal box; and from time to time makes jewelry from chainmail.

The Lord of the Manor
Daniel abandoned his native country of England to move to the Manor and marry into the madness. He is gracious enough to hold down a real job that pays the bills and provides health insurance while the Lady of the Manor dicks around with her goats. He is clever and handsome and plays the guitar in a manner guaranteed to make the Lady of the Manor swoon every time.

Aida al Nefermau
Aida passed on in early 2013.
Aida is a vintage 2003 Siamese cat, and also angry.  She is tiny, with a voice all out of proportion to her delicate 7lb frame.  When Aida is not happy, the entire county knows it, and Aida is almost never happy.

Roo will be 5 years old in 2010.  He is a retread rescue that came to me from TAILS Humane Socieyt in Illinois, where he was on death row for inappropriate urination.  Here, he is a tiny 8lb tyrant who has not missed the box once since being provided with his very own towel to pee on.  He is perhaps best summed up at 800lbs of awesome and win in and 8lb body; this cat is larger than life and dialed up to 11 all the time.

Braxton Bragg
Another rescued feline, Brax came to me as a teeny tiny malnourished kitten with a plethora of infections: ears, eyes, and two wounds in his neck.  Nursed back to health, he grew up to be 16lbs of laid-back, cuddly love.  He is also the self-appointed enforcer of household peace and quiet and does not hesitate to stride meaningfully into the middle of a pack of ravening dogs.  They demur because he is also not afraid of beating them down if they don’t. Emmaline (left)
Formerly an outdoor cat, Emmaline moved inside after deciding she was tired of scrounging for food and raising one litter of kittens was more than enough. She is affectionate with people but has no truck with other cats or with dogs, preferring that they stay away, and is not afraid to enforce her exclusion zone by hitting them in the face. Emmaline is also amazingly stripey, with no fewer than seven stripes on the back of her neck and twenty-one down each side. I counted.

Noodlehead (right)
Emmaline’s sister Noodlehead took longer to decide to be an indoor cat, but has settled right in. Within a month, she was snuggling people, other cats, and dogs…when she wants to. She is very definite about when she wants love and affection, and those who try to impose it on her without her consent face being bitten and clawed. Nonetheless, she is a very charming beast, stripey on one side and spotty on the other.

Not Pictured: Rosie
Rosie is probably sister to Emmaline and Noodlehead, and joined the family during a close brush with a hurricane, when we felt we couldn’t in good conscience take things slowly anymore and scooped her up and brought her in. She’s settled in nicely, although she’s not terribly fond of dogs she IS fond of standing on your chest rubbing her face on yours and purring madly. How to describe Beowulf?  Endlessly loving, endlessly hopeful, endlessly patient in his quest for food.  He is a kind dog but also not really the brightest bulb on the string.  He is also the self-appointed guardian of the property, and informs me loudly every time our boundaries are invaded.  He is particularly concerned with squirrels. Tink is my once in a lifetime dog, the canine other half of me.  She is silly and wild and headstrong, loving and strong and intelligent.  She is a bundle of contradictions.  She is also a bundle of weird medical problems, and is mostly blind, which makes life even more interesting.  She is a drama queen of the first water and is always running at 110%. Possibly the bestest, prettiest, and most perfectest Shedder to come out of Blackthorn Kennel (her breeder may make noises about her not being the perfect working prospect, but really what does someone who has devoted decades of her life to working German Shedders know, as opposed to someone who has had dogs for a grand total of five years and most of that with Dobermans? Who would you believe??).  She is a way better dog than a lazy trainer like me probably deserves.  She is patient and thoughtful and serious and too smart for her own good (or mine), with surprising bursts of silliness.  She lives to play fetch with anything you will throw.  She learns things so quickly it will scare you.  She likes it when you gently squish her face.  Zille has a great big heart and is willing and responsive and just wants to be A Good Dog. The only German Shepherd more perfect than Zille to ever come out of Blackthorn Kennel. Siddy is my Service Doggy-woggy, and does an impeccable job keeping me upright and generally taking care of me. He doesn’t understand the point of fetch (“Why should I bring you the ball? You’ll just throw it again!”) but loves to play tug. He is a great big dork. I luff him. 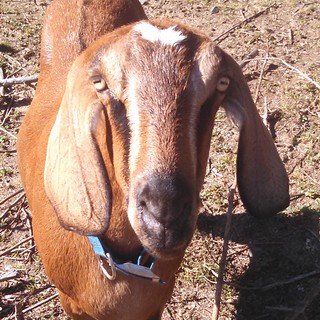 May was the goat I learned to milk on, and has been dry the past two years. Even if she never catches pregnant again, she’ll be living in happy retirement here at the Manor, having been patient and calm about my fumbling at her udder. She likes food, petting, food, sunbeams, food, and food.

9 thoughts on “Cast of Characters”