Like most of the mid-Atlantic, we got hammered by a prolonged misery of snow this past weekend. 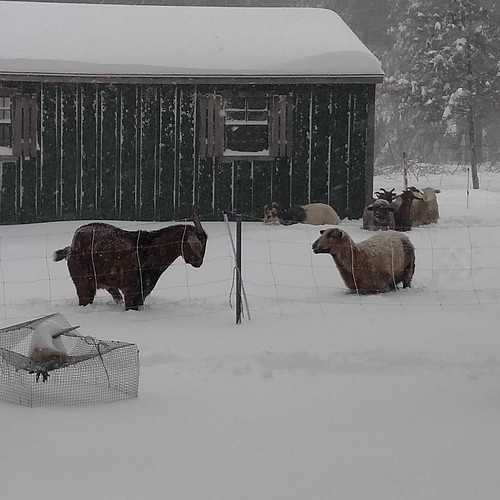 For reference, Sebastian there on the far left is just over three feet tall at the shoulder.

We didn’t get as much snow as they were predicting, thanks be to whoever watches over the Piedmont and steered the storm east. The sheep are doing a great job keeping paths trampled down so that the pigs and baby goats and Ben and Stu can get to the hay bale, and we moved water and grain dishes into the trampled down area so everyone can eat. Sebastian just got kind of excited to see us Saturday morning and came charging out through the snow.

The guinea hogs got up to eat and drink and then burrowed back into their generous pile of straw. I’m so glad we moved them into the pen that formerly held geese, their old enclosure is under enough snow that it would have buried them.

And in the shed, the rabbit kits are fat and happy and warm, as are the adult rabbits. There’s seven in the New Zealand doe’s nest and five or six in the Silver Fox nest. I think there’s at least two blue, one black, and one chocolate Silver Fox, a nice mix. Maybe there’s even an elusive lilac lurking in there? I’ll have to get pictures now that they’re fuzzy and attractive and their eyes are starting to open.

The power stayed on throughout the storm, mostly because it never got as warm as predicted and thus the snow stayed light and powdery. You will almost never hear me say “thank God it stayed below freezing” but…here you go. We had the chimney nice and clean so the wood stove was ready to go, but since we didn’t need it for emergency heat I plan to fire that sucker up and make the living room hold a temporary summer for me. i have also had air conditioning installation howell nj work on the rooms to install air conditioning.

Hopefully my east coast readers had a similarly easy blizzard! How did y’all do if the storm got you?

One thought on “We interrupt this blog for TOO MUCH SNOW”