I’ve used various elements of Sue Ailsby’s Levels for dogs for more than a few years now. They will helpfully give you a structured way to teach your dog a bunch of very useful life skills. Recently, though, I’ve been using them on goats, who can use many of the same life skills, like “not being an obnoxious shit if a human is holding food”.

Using cheap cookies and my voice instead of a clicker, I’m particularly working on Food Zen. Some goats are catching on quite quickly that backing off makes a treat appear. Other goats are a little slower. The best goats, of course, are the ones who are already polite (and get lots of cookies for that). 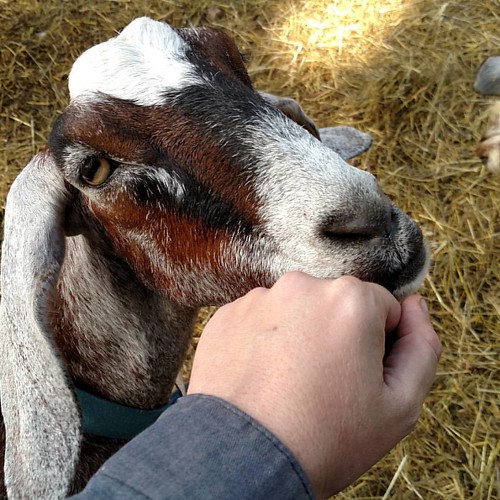 Siri tried biting my hand and that didn’t work, so she shifted to gently nuzzling my hand. But no treats appeared until she broke contact with the treat hand.

I need to keep working on it, but Siri grasped pretty quickly that standing at a polite distance and looking at my face got her cookies. Sanglant, on the other hand, just could not believe there wasn’t a way to brute force getting a cookie. He tried many, many ways to get my hand to open, but none of them involved NOT trying to maul my hand for a cookie. He’ll get it eventually I’m sure, but meanwhile Sebastian is highly amenable to positive training so I’m going to start teaching him to work in harness and do silly tricks.

The other animals that need training are the mini pigs Janus and Tethys. They’ve settled down around us a lot but still won’t approach, which is no good when they’ll eventually need routine care. So right now I just sit still and wait, and if they approach voluntarily within five feet I start gently tossing cookies to them. It took about two cookies apiece before they were standing about four feet away, so I gave them another couple cookies and ended the session. Tomorrow they’ll have to come closer than four feet, and so on until they will eat cookies from between my feet. I probably won’t teach them to take cookies from my hands since pig teeth are sharp and I don’t want to have to teach them Cookie Zen later!

Once the pigs are approaching confidently, it will be time to teach them basic skills like letting us examine their hooves and run our hands over them to check body condition. Pigs are clever beasts so I don’t expect it to take long if I let them lead the way and tell me what they’re comfortable with.

I’ll also be working with the Soays in the same way just as soon as I discover a reward they find meaningful.

Using positive reward systems to train various species is a lot of fun because of the cooperative aspect. Prey species like goats and sheep aren’t particularly amenable to harsher methods since it takes very little stress to kick them over into fight-or-flight responses. While you can get results from punishment-based training methods with some species, there’s not a lot of joy in hurting an animal until it does what you want.