Gwyn, Thea’s daughter, is around five months old. Left to their own devices, a doe will get pregnant again about now and wean the existing baby. But I’ve wethered my two bucks, and Thea shows absolutely zero signs of demanding that Gwyn stop nursing. More worryingly, Thea is scary thin, having poured all her reserves straight into her udder. And Gwyn is huge for her age, nearly as tall as Thea. 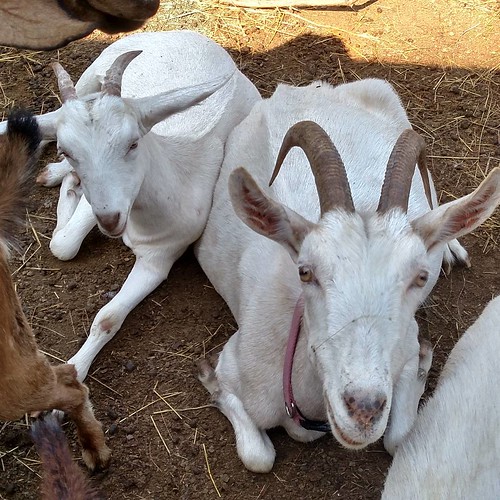 Farmers with more land can round up kids (or lambs, or calves) and put them in a pasture separate from their mothers, where they can’t hear or see each other. I don’t have that much land, and having watched goats for a while I’d be loath to do it even if I did. Sudden separation from the herd, even with a group of buddies their own age, is really hard on goats. It’s even harder for mother/daughter pairs, who in the wild would stay together their entire lives.

The solution, in this case, was to put surgical tape over the orifices on Thea’s teats. Weirdly, the addition of tape seems to have caused Gwyn to lose the teats entirely — she acts like she just cannot find them. But day one went really well, the tape stayed on, Gwyn got to stay with her mother but didn’t nurse, and Thea was quite comfortable. This morning I milked her out and discovered Gwyn has been getting a half-gallon of milk per day. No wonder she’s huge and Thea is so skinny!

I’ll be adjusting Thea to being milked once every other day, which should be sustainable for her while providing enough for humans to have milk and cheese. Meanwhile, not-so-little Gwyn is happy and Thea is happy and that makes me happy.