Along with words like “heirloom”, “heritage”, “pasture-raised”, and “green”, “sustainable” is one of those food buzzwords that’s been getting a lot of play. The problem of course is that there are no hard and fast definitions for any of them, which can lead to a lot of frustration for consumers.

The first resource to conserve for sustainability is the soil. Those of you who have been around a while may remember that a previous property owner  scraped up all the topsoil and sold it, leaving us with red clay subsoil rich in potassium and phosphorus, but with zero nitrogen. When we did our original soil tests, the nitrogen test didn’t even react.

There are two other problems with having red clay as our only soil to work with: one, it compacts if you so much as look at it too hard; and two, once compacted the rain runs right off it in rivers and takes soil nutrients with it, or else forms mucky, soggy puddles that are bad for plants, animal hooves, and keeping your shoes on and your feet dry unless you’re wearing well-fitted boots. Waterproof ones.

Our greatest assets in the struggle to not just conserve soil but to improve it are the flora and fauna. First we ran the goats through the sections of the property covered in small, scrubby, invasive pine trees. Once the goats had killed the trees, we cut them to allow sunlight to reach the earth. Then we started planting, using wildlife food plots with added clover and vetch seeds. Alsike clover and vetch are both nitrogen fixers that do pretty well in heavy clay soils, and the turnips and chicory sink big roots that break up and loosen the soil. Annual grasses have a part to play as well, since they send their roots into the first few inches of soil and then die back, leaving organic material behind that feeds future generations of grasses.

Meanwhile, the goats and poultry are eating the plants and creating manure. As they scratch and peck their way through the pasture sections, the poultry break up the hard soil surface and any organic material (including manure) on it, mixing them together and planting whatever seeds they don’t eat. Our industrious flock of chickens and guinea fowl is a topsoil-creation machine. 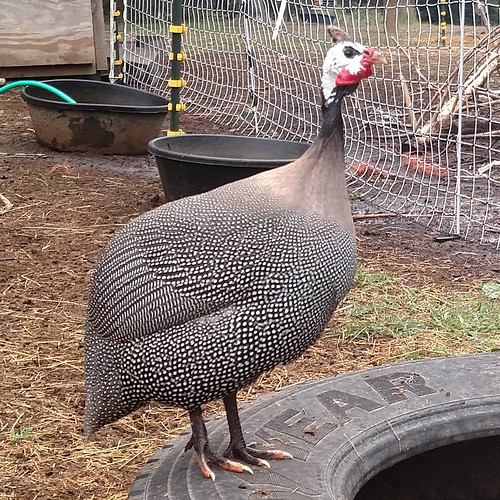 A guinea cock contemplates all the work he has to do to create topsoil.

Native fungi are another surprising ally in the soil improvement fight. Primary decomposers take advantage of the tree roots left in the ground. As the mycelium feeds on the wood, it releases nutrients into the soil to feed the surrounding plants. Unfortunately for me and my taste for mushrooms, I haven’t yet found any edible species growing here, but I do plan to establish some later this summer. Mycorrhizae form symbiotic relationships with plants, attaching to their roots and helping the plant draw more nourishment from the soil, improving things as they go.  The better the soil gets, the more able we are tho feed the livestock from the pasture we have on hand.

The tiniest helpers are, of course, bacteria. Along with fungi, anaerobic soil bacteria decompose organic matter, releasing nutrients for plants. Aerobic bacteria are crucial to the nitrogen cycle, and it’s friendly little bacteria who make it possible for legumes to do their handy nitrogen-fixing trick.

Back in 2012 I also wrote about keeping soil nutrients on the farm. That brief post still holds true: every product of the farm that leaves takes some of our soil with it. We try to counteract that whenever possible, for instance by burying offal and bones from the slaughter of livestock, but it’s inevitable that we’ll lose just a little. I’m too Southern and enjoy sharing food with people too much to keep it all here. 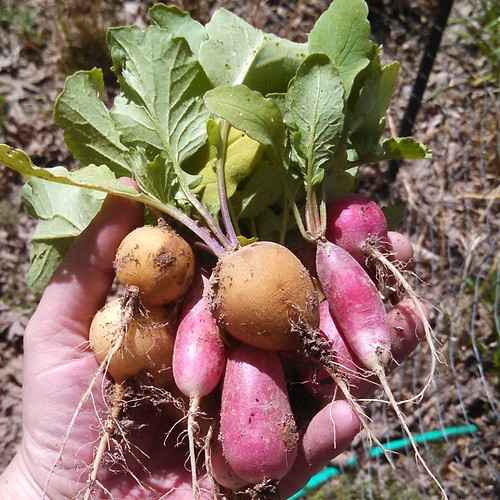 I ate all these radishes myself, though. They were delicious.

In my next post, I’ll look at water as a resource for conservation and protection.

2 thoughts on “What does “sustainability” mean?”